Am I The Only One?

Am I the only one who is annoyed about the Black Friday bonanza spilling over onto Thanksgiving day?

Actually, that's a rhetorical question. I'm not the only one who is annoyed. I've been scouring social media platforms this evening looking for evidence of other's discontent on the subject, and I found plenty.

You see, I'm so thankful for the things I have, but that's just the issue: they're things. Possessions. Objects. Sure, I think some of the things I own are pretty cool, and certainly there are many other things that I would like to own, but that aren't in my price range. Objects, though, do not have the meaning that relationships have. For what it's worth, I think that possessions aren't what makes life worthwhile, it's the relationships we have. I don't need "big-ticket items" like a TV to enjoy life. In fact, I don't even have cable (there's not much in the way of TV programming that's worthwhile, in my opinion), and I actually don't miss it one bit since I made the decision to get rid of it.

My family, friends, co-workers, and others are worth far more to me than any object.

Where did that thought process break down in our society? It seems like more and more people are less focused on Thanksgiving (these days, I sometimes wonder how many people know the holiday's origin), and are more focused on Black Friday deals.

I'm a Black Friday shopper. I go out every year in search of deals, but I absolutely refuse to go out on Thanksgiving Day to shop for objects when I could instead be with people that I care about and who care about me. This isn't a new feeling for me, because I distinctly remember discussing this last year.

Sadly, there is a demand for these stores to be open on Thanksgiving Day. I understand the insistence from these companies that their customers have asked for sales on Thanksgiving, but wouldn't it be great to see some companies taking a stand? Have a backbone. What about an ad that says something like, "we believe in giving thanks, and we're thankful for our employees and their families, so we won't be opening our doors until 6 am on Friday?"

So, this year, I'm talking to you, Sears, Kmart (opening at 6am on Thanksgiving Day? Really?), Target, Toys R Us, and Target. There are others, I'm sure, but those are coming to mind first. Let your employees enjoy the holiday, and stop making it sound absolutely urgent that I leave my family on Thanksgiving to find a good deal.

Sears actually responded to my tweet on the subject, saying that they were focusing on seasonal employees and those who volunteer to work on Thanksgiving. It's the same response they have sent hundreds of others who are raising concerns about the hours of operation. In response, I asked whether there would be a consequence for employees who didn't volunteer and how many were "volunteering" out of necessity. I haven't gotten a reply to that one.

What do you think about all of this?

Posted by Elizabeth at 9:41 PM No comments:

The Enemy in the Midst of Excitement 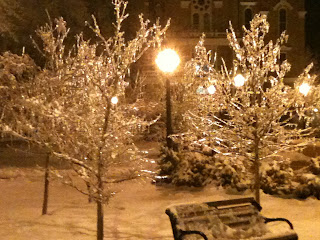 Do you hear that? Can you smell it? The holidays are in the air, ladies and gentlemen, and I couldn't be more excited. This is without a doubt my favorite time of the year. I'm actually not sure if it would be possible for me to be more excited about the fast-approaching holidays as I am.

I like to remind my fiance that on the top of my "reasons why I'm marrying him" list is because he is just as excited for this time of year as I am. Growing up, both of us were the giddy kids on Christmas morning waking everyone up at 4:30 because, really, what's the point in trying to sleep if you're just that excited? Recently, I assured my parents that even though Cam and I will be spending our Christmas mornings together once we're married, we will make a point of waking everyone up so that our presence won't be missed too much...Oddly, my parents didn't seem to excited about my generous offer to call them repeatedly until they were up and at 'em on Christmas morning.

Oh, and if you're wondering, yes, I have already set up my Christmas tree. For those of you who just said some variation of "ugh, seriously?," it's only because I store my tree in my shed, and I have developed a phobia of spiders, which is ironic since I have a degree in psychology. Consequently, I was completely unwilling to venture into the shed to retrieve my tree without the help of either a) a disaster relief responder b) a firefighter, or c) Cam. Someone has to slay those spiders, after all, and it certainly won't be me, if the last time I had to do so is any indication of my ability to stay calm.

You see, I found a spider lurking on the ceiling not long ago, and I prepared to wage war. I quickly fashioned a sort of jousting pole out of my broom. On the tip of the broom, I used a rubber band to secure a tissue to it, so that I could simply stab the spider with the broom handle, remove the tissue, and flush the pesky thing down the toilet...But not before I got out my rain boots, tucked my pants into them so that the spider wouldn't be able to crawl onto my leg, found a pair of rubber gloves, which I made sure covered my hands and also the ends of my long sleeves, so that it couldn't find its way up my sleeve. I then used the drawstrings on my hood to make sure the smallest amount of my face was showing as possible. As I jumped and screamed like a complete loon, I finally succeeded, and promptly threw out the gloves, and put my clothes into the wash. It's completely irrational, yes, but that's the nature of phobias, right?

Anyway, I couldn't bare the thought of finding a spider on or around the bin holding my Christmas tree, so Cam had the honor of dealing with that little problem the last time he came to visit.

Since I am a fan of Thanksgiving, and since I don't want to completely skip over it, I have not decorated the tree yet, and I won't be until after the Thanksgiving festivities are over. I must say, though, It does feel nice knowing that I won't be dealing with my little 8-legged arch enemies when I'm trying to enjoy the holiday season.
Posted by Elizabeth at 9:19 PM No comments:

Elizabeth
My general philosophy is this: I am not a hippie, but I'm a fan of peace, love, and fresh air.